What If We Were ALL Wrong About Illegal Immigration?

I guess I’ve heard so much about illegal immigration over so many years of my life – that I have some what blindly assumed there were thousands (if not millions) of people trying to sneak into the USA every year.  I was alive for the Reagan era amnesty, and recall the rhetoric since that time about how we need to be sure to never do this again. I know that this is a major concern for most of my conservative friends. I can’t count how many times I’ve heard statements along the line of “They aren’t undocumented workers, they are illegal aliens!”

Then there is the analogy of “those who come into my house via the front door are worthy of invitation to stay, but those who break into my  yard from the side do not deserve anything but to be driven from my property: which is often used when discussing immigration. It is unfortunately quite simplistic, and as result it fails to encompass enough reality to be a good reasoning point without lots of footnoted exceptions. [What about religious and political refugees? What about those who actually have to flee for their lives? Being an American it is often easy to not realize this is the plight of much of the world.]

I really do understand this reasoning – and how people who who ascribe to it do not view themselves as racist.

In fact, illegal migration ended eight years ago and has been zero or negative since 2008, because migration is a young person’s game. If you don’t migrate between the ages of 15 and 30, you don’t migrate at all, and the average age in Mexico is now 28 years old.

Unfortunately, so often in America there is an assumption that even those who are here legally are under some obligation to prove they are aren’t here illegally. I’m always shocked when I hear conversation or comments displaying an underlying current that everyone who appears to be an immigrant of Mexican or other Latin decent they are somehow here illegally. We don’t give others the grace nor the benefit of the doubt we often demand for ourselves.

There is in fact no onus of proof upon any of us to proactively prove our right to be here. You don’t prove your innocence – this is not our ideal of justice.

This method of applying stereotypes to people based on assumptions that have no actual basis in fact – THIS type of profiling is where the line into racism is crossed. And of course, unfortunately, there are some who are just flat out racist against all who aren’t like themselves. Immigrants are inherently guilty to varying degrees based on the country of origin when contrasted to self righteous one’s own racial origin and identity.

So, how was I caught off guard?

I hadn’t considered the proposition: “What if the illegal immigration story I’m so familiar with was actually a story of the past – and that it doesn’t really apply to us today?”

This idea at the outset sounds very much like heresy doesn’t it. I mean, it couldn’t possibly be even really be partly true, but much less mostly true could it? I mean isn’t the need for building a wall a major component of one party’s platform for this 2016 election cycle?

But – what if the proposition I stated were the case?

I was reading the repost of a blog post from last October on Salon about this very issue by Robert Reich (former Secretary of Labor and professor of Public Policy ). He covers four myths common to the immigration debate that are not actually based in factual positions. Two of which are:

What if the platform positions of immigrants taking American jobs was a myth? (They add economic demand and push job creation)

What about the myth that they drain public budgets? (Undocumented Immigrants actually paid 11.8 billion in taxes in 2012)

Then I read today as well the Doug Massey (Professor of Sociology specializing in immigration) interview transcript which dealt with so many of these same topics. And it seems from what I see that the largest and weight on the economy now related to illegal immigration has to do with the incarceration and detention costs. Crime is lower in immigrant neighborhoods than the national average. The average ‘undocumented’ immigrant has been been in the USA for 10~20 years now.

“Immigrants, in general, are very uninvolved in the welfare system. In fact, legal immigrants are banned for five years from receiving these federally-subsidized services. Undocumented migrants are banned from Obamacare, of course, the Affordable Care Act. The only real expense is emergency medical care.”

1) there was no issue nor problem until the 1965 Immigration and Nationality Act amendments. And 2) illegal imigration has been statistically ZERO since 2008.

So, please take a moment to look at these two articles, and think carefully about them. Consider I pray the possibility they might be true. It is important that we actually deal with truth and facts when we consider our politics. It is easy to get caught up in party, and what we assume to be true. But, when scientists and economists come to us with different data than we expect – we need to at least look at it with an honest and open heart and mind. 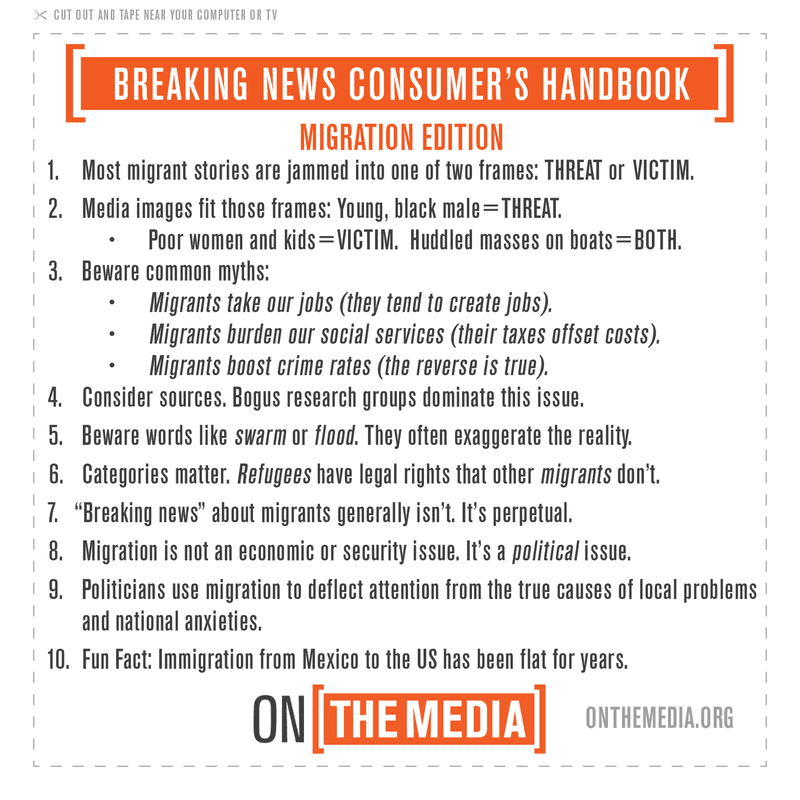 Love this infographic from onthemedia.org

Born in Alaska, lived there until my senior year of high school. I AM Northern Exposure. Then Guam. Minister and techie. Then Japan. Graduate student and all-around anthropologist. Now Atlanta. Business Analyst and pinball machine museum proprietor. I am famous in Australia, HUGE in Japan and the sole reason the cattle industry remains profitable. I’ve been everywhere, love everyone and am kind of an intellectual snob. My family is very important to me, and I’m a gamer. Yes – I admit it. I’m a gamer and I like Star Trek. For a decade I had a fauxhawk, am tattooed, and love house and trance music. It’s true. (shhhhh)
Newer Post
Frequent Password Changes Could be the Enemy of Actual Security
Older Post
Mississippi Prison Revenues Down